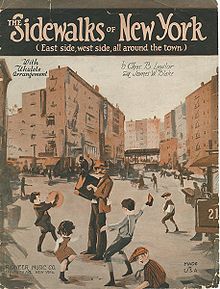 Trip the light fantastic: to dance.

After all the years of singing,

Now I finally know the meaning!

“The Sidewalks of New York” is a popular song about life in New York City during the 1890s. It was created by lyricist James W. Blake (23 September 1862 – 24 May 1935) and vaudeville actor and composer Charles B. Lawlor in 1894. The song proved successful afterwards, and is often considered a theme for New York City. Many artists, including Mel Tormé, Duke Ellington, Larry Groce and The Grateful Dead, have performed this song. Source: Wikipedia

Comments happily accepted. I reply to each one here on the blog -directly below what you write! Cancel reply