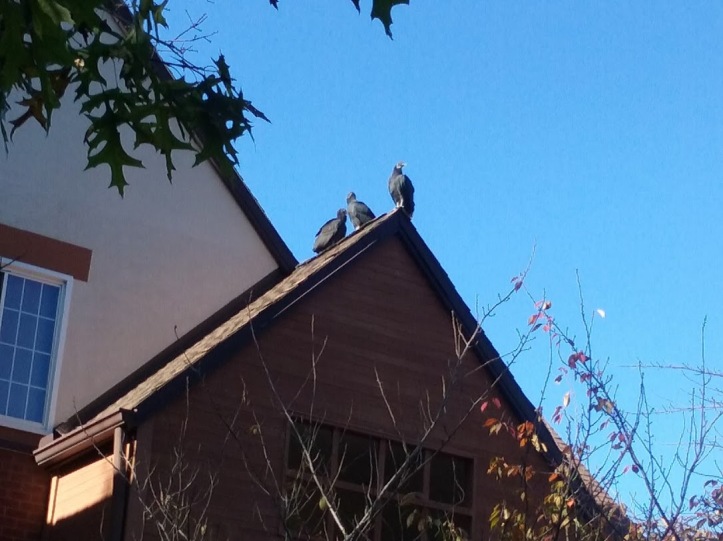 I spend most of my social media time on Instagram. It occurred to me recently, that, while there is some overlap of readers of IG @josephina.ballerina and this blog, said overlap is perhaps not great. Therefore, starting today, I shall make dual posts if it seems appropriate. I’ve been participating in August Break 2018 over on IG. A daily prompt is published, to be followed by a photo and some thoughts based on the prompt by whoever wishes to play along. I’ve met a lot of nice people from all over the world by doing a couple of these a year over the last couple of years.  Today’s prompt was: Bird.

August Break 2018
Day 29 Bird
November 5, 2016. These three beautiful Black Vultures (a mama and two juveniles) had just landed on this roof. I had walked outside and was looking at the lovely clear blue sky, when, from out of that clear blue sky -quite literally- I was enveloped in a Sudden Almighty Thumping *WHOOSH* as mama took off from her perch on the archway of the building Behind me. Of course had No Idea Whatsoever I was being watched from behind by a party of three! She swooped five feet over my head then sailed up onto this peak directly in front of me. Then, as I was coming up out of my duck, gaping in surprise and delight, it happened twice more in quick succession as her two babies followed. It was funny to watch because, although they were almost as large, they were not nearly as graceful as mama. At all. As in they kept sliding backwards down the roof after landing. The memory still makes me smile and I can still hear the Almighty Whoosh from beneath their five foot wings.

Comments happily accepted. I reply to each one here on the blog -directly below what you write! Cancel reply